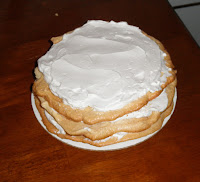 It's my friend Ebbye's birthday and she has been asking me for a year to make this for her, but I either lost or forgot to write down the ingredients. I found a similar recipe to guide me and just switched a few ingredients and amounts around.

Take a small salad plate and trace circles on a piece of parchment paper. Invert the parchment papers onto two separate sheet pans. Preheat the oven to 200°. Have all ingredients at room temperature(I have found that it is easier to separate eggs while they are cold, but they whip up better at room temp.)

6 large egg whites
1/2 cup thot not sugar (you can use granulated sugar and if you want it sweeter use 3/4 cup, but it was just right)
1/4 tsp cream of tartar
1/8 tsp almond extract
1 tsp vanilla
1/2 cup almond meal (this is finely ground almonds, you can substitute 1/2 cup chopped almonds or pistachios, or even pecans)
Whip the egg whites in the bowl of an electric mixer until frothy.

Gradually add the sugar and cream of tartar, I did a tablespoon at a time.

Fold the nuts, vanilla, and almond extract (if using a different nut, omit the almond extract).  I found that the extracts did not distribute evenly, so they probably need to be added first.

Gently place the meringue into a pastry bag with a #805 tip, or cut a big hole in a plastic baggie. Pipe out the circles, filling in each circle with a spiral into the center. If there are holes, just smooth the meringue over them. Bake for 2 hrs, or until totally crispy. Prop the oven door open with a wooden spoon to allow the meringues to cool slowly to help avoid breakage.   I layer the meringues with whipped cream.  Fill and assemble the meringues immediately so they do not lose their crispness.  This is also delicious with shaved chocolate in the layers on top of the whipped cream and you can also cover it with ganache then frost with Italian Meringue Buttercream.  You can also freeze it and eat it frozen, which I have not tried.


﻿Whipped Cream
1 cup heavy whipping cream
2-3 tbl thot not, palm or cane sugar (I put the cream and sugar int the mixing bowl and chill for at least 30 min. to dissolve the sugar)
1/2 tsp almond extract
1/2 tsp vanilla extract
Whip until stiff, do not over whip or under whip.  It will leave peaks in the whipped cream.﻿
Here is a picture of one I made with chopped nuts instead last year. 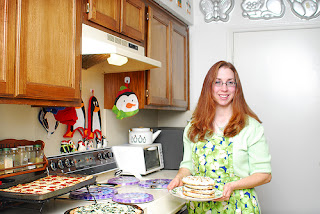 As you can see, I have a very small kitchen to work with!  LOL
Have fun baking, these are easier to make then you think!!  If you have nut allergies, omit the nuts!
Missy

Posted by Missy Shay at 2:00 PM No comments:

Email ThisBlogThis!Share to TwitterShare to FacebookShare to Pinterest
Labels: Recipe 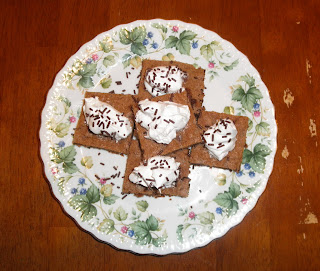 One of my favorite treats is Nutella - or hazelnut spread.  I love it on crepes, but I'm not sure I know how to make crepes.  I was wanting to make some chocolate chip cookies for my husband  I have found following the recipe on the back of the chocolate chip bag usually produces some pretty good cookies.  So I pulled out all of my ingredients and measured out my flour and I was 1/2 cup short!  Uggh!  So I had to substitute kamut flour., and it worked out just fine!  Here is what I did, the recipe is mostly from a Nestle bag with a few changes. 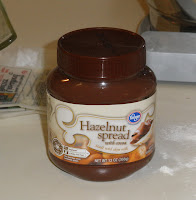 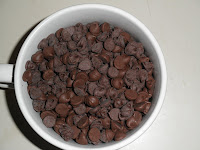 Preheat oven to 375°
Combine flour, baking soda and salt in a small bowl.  Beat butter and sugars in large mixer until creamy.  Add vanilla and Nutella and mix. 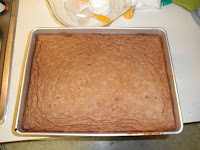 Add eggs, one at a time, beating well after each addition.  Gradually beat in flour mixture.  Stir in chocolate chips.  Then you can be lazy like me and spread it in an 11x15 cake pan or jelly roll pan and bake for 25 minutes.  Be sure to grease the pan first!  Or you can do it the old fashioned way  and drop by rounded spoonfuls on an ungreased cookie sheet then bake for about 10-11 minutes.  Cool on baking sheets for 2 minutes; remove to wire racks to finish cooking. 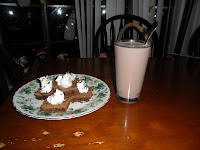 To finish them off, top with whipped cream and chocolate sprinkles!  And you can't forget the tall glass of milk - my husband loves chocolate milk!

Happy Baking!
Missy
Posted by Missy Shay at 8:05 AM 1 comment:

Email ThisBlogThis!Share to TwitterShare to FacebookShare to Pinterest
Newer Posts Older Posts Home
Subscribe to: Posts (Atom)
"Oh taste and see that the Lord is good: blessed is the man that trusteth in Him." Psalm 34:8