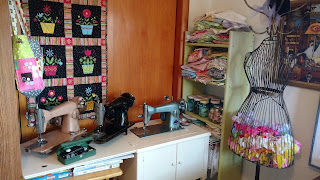 I wanted to talk about my Japanese made sewing machines.  They are made to usually resemble the Singer class 15 machines.  After WWII, the United States gave the patent for this machine to Japan.  It was to help Japan get back on it's feet economically.  These machines are from the 40's, 50's and 60's.
Here is a close up view of the army green machine, who is a Premier.  It belonged to a dear friend of mine.
http://missyscakesandaprons.blogspot.com/2013/11/another-new-machine.html
They were often given American sounding names to appeal to American consumers.  Unfortunately, some people like to collect the name plates, which is why so many machines are missing the name plates on them.  You are not technically supposed to call them clones because it is just a term that collectors like to use.
I have a close up and more information about my tan machine here:  http://missyscakesandaprons.blogspot.com/2013/10/japanese-15-clone.html

I was able to get some very interesting information on the black machine, she is a Dressmaker Special from Leonard's Department Store in Fort Worth, TX.
A better picture and the information is here:
http://missyscakesandaprons.blogspot.com/2013/03/dressmaker-special-sewing-machine.html

Large retailers would purchase machines and have the company name on them, some even had their own machines like the Sears Kenmore. 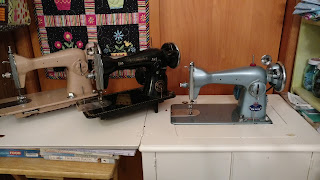 I have been wanting a blue machine for a while.  She is my newest.  I am going to turn her into a a hand crank because her motor sparks and the foot pedal is missing.  My neighbor across the street picked her up for me at an auction, he only paid $5 for her!  I love her white cabinet.

These Japanese machines were very well made, quiet, and run smoothly.  Japan also gave us a lot the colored machines.  The Japanese manufacturers made a lot of improvements to the machines which were also heavily influenced by German machines.

I have to apologize about my awful phone pictures.  My husband really needs to get my camera fixed.

The North East Texas T.O.G.A. (treadle on gathering academy)is coming up April 7 and 8, Friday and Saturday, in Lone Oak, TX.  If you would like more information about it, they have a Facebook page here:  https://www.facebook.com/groups/NortheastTexasToga/

If you have any information to add, I would love to hear it!

Those machines are so pretty!

I love hearing about and seeing your older model sewing machines! I find it really interesting. I still have my mother's old Singer sewing machine with pedal, that I first learned on. I keep saying that I can keep on sewing even when the power goes out, but it hasn't been used in years. It has a special spot in my sewing room :)!

Thank you for the education! I am grateful for ladies like you who keep up on the wonderful history of our sewing machines. =)

Very interesting post! You have a nice collection!! Is it difficult to turn one into a hand crank machine, finding parts to do it?

I would really like a pink class 15. Not the bandaid color, but pink.

The US Government gave the patent to the Japanese. Singer didn't have any say in the matter. I have a Japanese 66 copy. I didn't know that the Japanese made those, too, but, I guess they did, since I own one. Pretty machines!

If you really want to get your camera fixed, don't depend on your husband to do it. Do it yourself!

Thanks for sharing - I've never known much about the older machines so it's fun to learn.