We have been trying to get this half wall torn down for five months, I've wanted it torn down since we bought the house in April. We thought it would be a quick one day thing, like on TV. 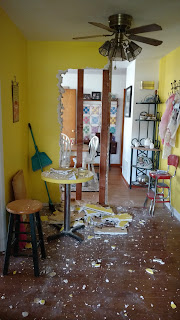 Unfortunately, when we started tearing down the wall, we found that it was laced with metal webbing and hooked into the ceiling with metal bars.  Those took a while to take down since we did not want to tear down the other wall, ceiling, or floor.  Then before we could knock down the drywall (which I had fun doing), DH had to move the light switch and plug, which he had never done before.
Now he needs to figure out how to remove the thick board across the ceiling and across the floor.

We did pull out two of those boards that you see on the left.  I also kicked one of the nails sticking up, wearing only socks.  It hurt, but I'm glad it did not break the skin or I would have had to get a tetanus shot! 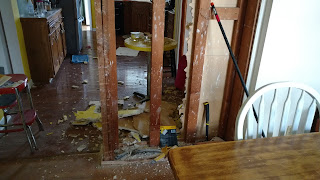 Did I mention I have a group of ladies, my homemaker's group, coming to my house next week?  Not to mention a baby shower cake to make on Friday for a baby shower I'm helping to host. Ladies Bible study on Friday.   I'm not sure when I'm supposed to have time to clean since I work on Mondays, Tuesdays, and Wednesdays.

I was hoping to finish my quilt so I could show and tell it Thursday at the homemaker's group and quilt guild that evening, but my sewing machine broke yesterday.  The part that lifts the presser bar that is connected to the foot, snapped loose last night.

I took the face plate off and proceeded to clean the inside.  It was nasty.  You have to remember that this machine is 126 years old.  That is a lot of gunk build up. 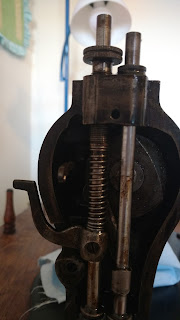 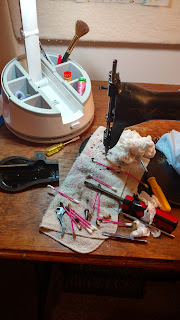 I oiled everything down and am going to have my husband try to loosen the top nut on the presser bar. Hopefully if he can loosen it, it will become unstuck.  I think what happened is that when I put the "new" hopping foot on it(I found it in my stash), I had to tighten the presser bar a lot.  I must have tightened it too much and caused too much pressure inside or something.  If I can't fix it, I will have to take it to the Northeast TX T.O.G.A. in April and have someone help me fix it.

Have a great day ya'll!
Missy
Posted by Missy Shay at 3:24 PM

Missy, you've probably already done your research and know this but be sure that wall you're taking down isn't a load-bearing wall! Removing a load-bearing wall will compromise the structure of your house. Remodeling jobs like these are so huge and messy. Through the years we've learned that any job that looks like it should take an hour will likely take 10 times that long (or more). But then maybe that's just us..... I'm always so impressed that you can take apart a machine and put it back together again and have it work properly! (I'm not a mechanical sort of person.)

I think you are making great progress. And, I'm confident your guests are coming to see you and don't care what state your project is in. Heck, they may appreciate it more by seeing it while it is going on. Just enjoy the company. And I'm sure the cake baking will work out too! But if I lived closer I'd be happy to help come clean and bake, although neither I do as good of job as you do.

You are brave!!! Good luck with your remodel!!

Remodels always come with surprises. Be careful and have fun!

Hopefully you can get the machine fixed. If not, then Margaret, Riley or Lisa should be able to fix it for you. Wish I could be at the TOGA. Good luck with the remodel. Never fun.