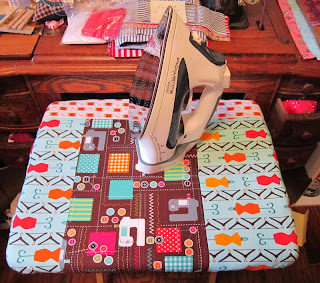 I needed a cover for my TV tray, I have a portable ironing mat, but I wanted something that fits my TV tray better.  I used material left over from my sewing caddy and just sewed them together quickly rather than doing a cute patch work.  I could not find a tutorial on how to make one with elastic, but did not want to make one with a staple gun because I wanted to be able to wash it.  So I just kind of figured it out on my own, next time it will look nicer and go quicker. 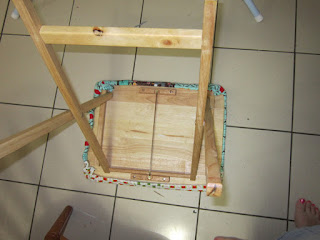 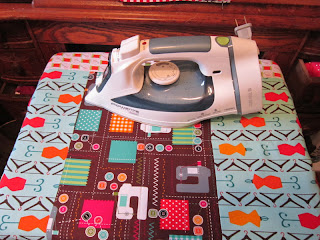 On another note, my iron died!  I bought it back in 2000 at Sears, it's a Kenmore.  I can not tell you how many times I have dropped that thing, I never cleaned it - yet it lasted me for 13 years!  I got it pretty cheap too, it was on clearance, I used a coupon and my employee discount.  All of this to tell you I had to buy a new iron.  We went to Bed Bath and Beyond.  I was fine with choosing the cheapest iron but my husband insisted on getting a Rowenta.  He liked the retractable chord and I had told him that it is a popular iron with quilters.  I don't like it though!  I do not like that the plate does not extend all of the way down and it is very heavy.  He insists I will get used to it, but I don't know.  What do you think or Rowentas?

What do you like to iron on and iron with?

Have a great day ya'll!
Missy

Phillipians 3:14  "I press toward the mark for the prize of the high calling of God in Christ Jesus."
Posted by Missy Shay at 9:21 PM

Love your ironing board cover. I used to have those trays. Wish I had kept one.

Love your TV tray cover. I just stapled mine, but wish I had done what you did. I love that idea of being able to slip it on or off. Maybe next time.

What a wonderful idea! I even have an extra TV tray to use. Thank you so much Missy. *happy dancin* I have a Rowenta, and it's ok, but now I wish I had gotten one that didn't have the auto turn off. Have a great day.

Aren't you clever to use a TV tray as a "Mobile ironing table"! I have a small portable ironing board with a cutting mat on one side but I don't use the cutting mat anymore because it got too messed up. Love your idea! I bought my iron at a discount outlet for next to nothing and it has been fine.....I haven't had any problems with loading photos on your page....

Great cover! I used to have a cradle sheet pattern that had you cut out a square on the corners based on the depth of the mattress, sew the corners up, and then zig-zag elastic just around the corner sections. I want to say it was a 4" piece of elastic that you stretched as you sewed but it might have been a 6" piece. The pattern was in a Nancy's Notions catalog which I have since misplaced. It worked great though, and I made several flannel sheets from that pattern.

I have a Rowenta and love it. The heavier iron will give you better results when pressing. I do not put water in mine though because that's supposed to make irons leak after a while. Use a spray bottle instead.

I love my Rowenta!!! I have had it since 1996 and the last time it was dropped it suffered substantial damage but is still working. They do not make them this heavy anymore at least not that I can find. I like the heaviness as it makes ironing go that much quicker because the weight takes out the wrinkles better.