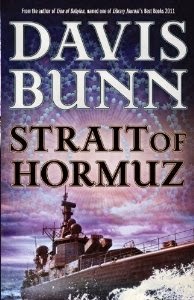 I got another great book from Davis Bunn.  The best way to describe this book is that the main character, Marc Royce, is a modern day James Bond who is a Christian and the book does not have all of the sex and gore that James Bond would.  This is the third book in the series, but you do not have to read the other two books to know what is going on.  Here is the plot of the of the book:
An under-the-radar phone call from the U.S. State Department puts Marc Royce once again on assignment—ferreting out rumors of a clandestine operation stretching from Asia to the Mideast. At stake is Iran’s threat to blockade the narrow Strait of Hormuz, cutting off vital shipping routes and escalating global tensions beyond the breaking point.

Under the guise of investigating money laundering via high-end art purchases in Europe, Royce finds himself in Switzerland with only sketchy information, no backup, and without a single weapon other than his wits.

His appointment with a gallery owner in Geneva is a dead end--the man is on the floor with a bullet through his chest. But it turns out Royce does have backup. The Mossad has sent someone to keep an eye on this undercover op, which is of more than casual interest to the Israelis. And it's someone Royce knows...

I know you want to start reading the book, you can read the first three chapters here!

Davis's website and blog are at www.davisbunn.com
Subscribe to his blog’s feed (to get his latest posts via e-mail or through your feed reader) at http://feeds.feedburner.com/DavisBunn
Sign up for his e-newsletter (for subscriber-only giveaways and advance notice of my upcoming novels): http://www.davisbunn.com/news.htm
Facebook Author Page: facebook.com/davisbunnauthor
Pinterest: http://pinterest.com/davisbunn/ -- check outhis “Strait of Hormuz” board at http://www.pinterest.com/davisbunn/strait-of-hormuz/
Twitter: @davisbunn - http://twitter.com/davisbunn

He is also having a fantastic sweepstakes where you can win a set of his and hers Swiss watches!  I kow my husband would love a new watch for Christmas!  LOL
I received a complimentary copy of Strait of Hormuz from Bethany House Publishers in exchange for my honest review.

I hope you enjoy the book as much as I did!