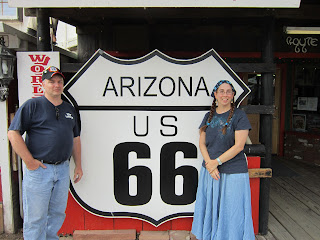 I know I have been pretty quiet lately, but I was on vacation for two weeks!   I had planned on blogging some while I was gone, but my laptop died the day after we left.  I think I lost all of my pictures, PDF patterns (some I bought) and all of my files!  I'm having to use my husband's laptop when I can.  He had a work conference in CA and we decided to make a road trip out of it.  On the way up there we went to Carlsbad Caverns (unfortunately the photos were lost on my laptop), San Diego Zoo, and ended in Anaheim where his conference was, we took RTE 66 home stopping at the Petrified Forest and the Grand Canyon.  Today I want to share with you my Rte 66 photos and my thoughts on some of the places we stopped.  We only had five days for this part of the trip, so I'm sure we missed some great things.

Our first stop was at the Rte 66 museum in Victorville, CA.  It was free and has some great photo ops!  Here we are in an old Model-T Ford. 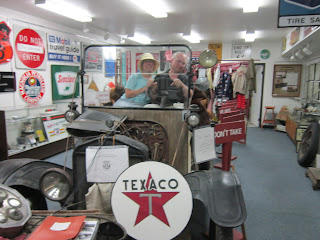 They even provided wigs (which needed a good brushing) and sunglasses for the VW bus. 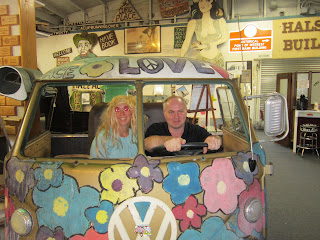 We ate at a historical diner for lunch, Mr. D's.  I had a black cow which is chocolate ice cream in a coke, I thought it was really good but Chris did not like it.  The diner was in Kingman, AZ at our next stop. 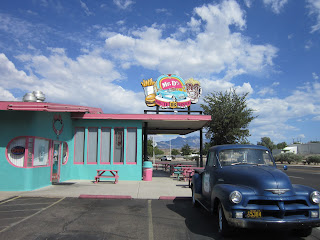 Our next stop was in Kingman, AZ for another museum. They had some great murals drawn on the wall.  It was $4 each to get in.  My husband decided to "take a nap" for this photo.  He's wearing a Rte 66 camp shirt and baseball hat! 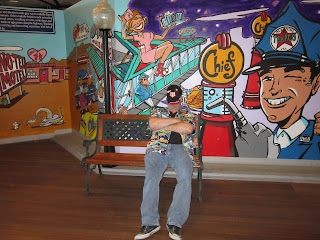 They also had fake store fronts, and the "buildings" were filled with all kinds of antiques and stuff.  They had a really good museum and gift shop.  A lot of displays and historical information. 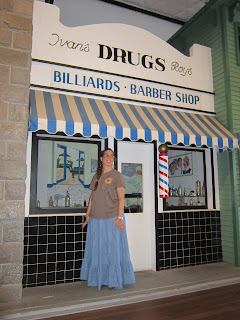 Excuse this terrible picture, but it was the best one of the earrings I got there.  They were hand crafted by a local resident.  Yes, they are hot dogs!  Click on the picture for a better look. 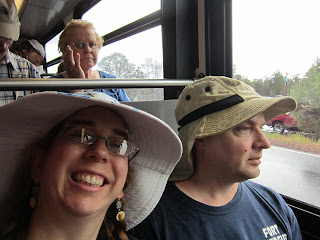 Our next stop was Seligma, AZ where the first picture was taken.  We stayed at a car motel, it was very clean and a big part of that era.  Although we did notice the next day that there was a hotel a couple of blocks down with themed rooms, I would have liked to have seen those!  This was our hotel. 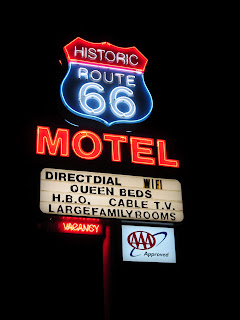 This town had the most stores with Rte 66 stuff, I even bought me a bandana there! 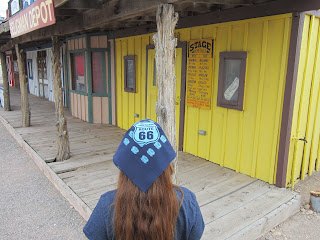 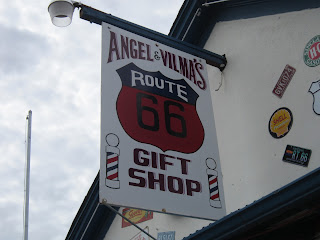 They had old store fronts, outhouses, an old jail and more! 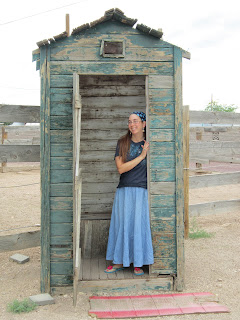 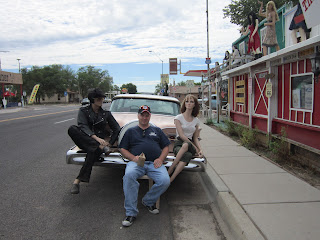 We even ate at the Roadkill Cafe! 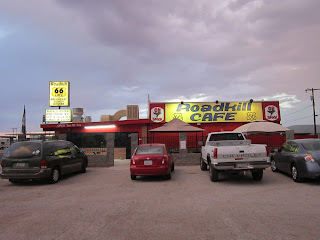 Here is a picture of Rte 66 at sunset. 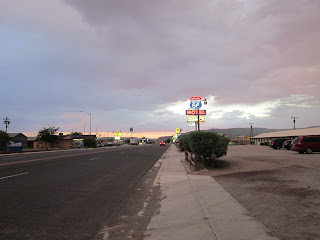 We stayed at the Wigwam hotel in Holbrook, AZ the next night.  I highly recommend this, it was so much fun!  The buildings look like teepees and they have vintage cars displayed in the parking lot. 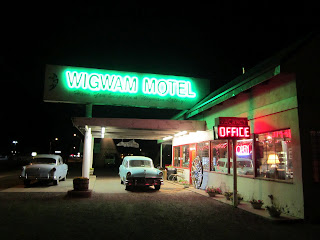 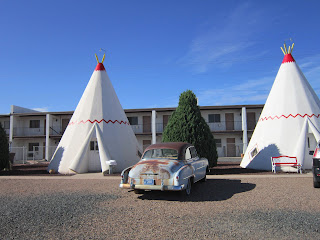 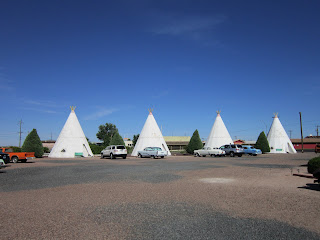 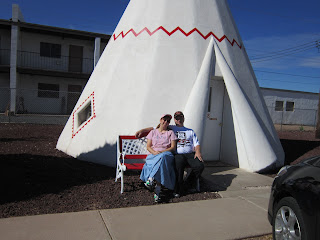 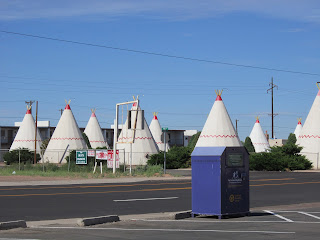 Here is the inside of our wigwam. 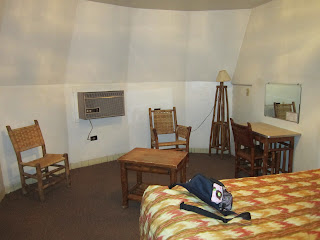 You can even buy their key fobs from the wigwams, which my husband did!

The next night we stayed in Grant, NM.  They do not have anything of interest except maybe some abandoned hotels.  We stayed at a cheap car motel.  At least it was clean and my husband got a great picture of the rainbow, there were actually 2 rainbows! 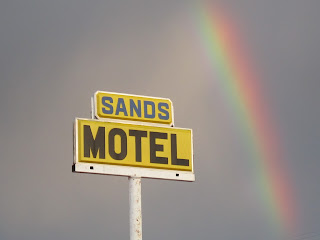 There is a Rte 66 car museum in Santa Rosa, NM.  If you like vintage cars you will love it!  We don't know much about cars, but it was still interesting.  Their gift shop has the best prices too! 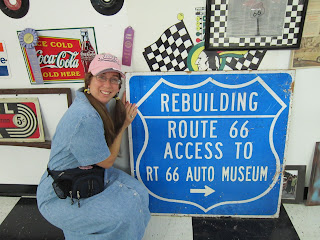 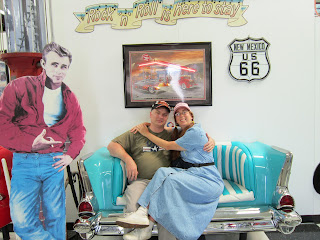 We wasted three hours in Albuquerque, we did not find anything historical there.  I wish we had not stopped there, we could have spent more time in Tucumcari, but everything closed at 5 and it was almost 5 when we got there.  They are trying to get an official Rte 66 museum there.
Our next stop was Tucumcari, New Mexico.  They have murals all over town, at least two old gas stations, old semi's on display and more. 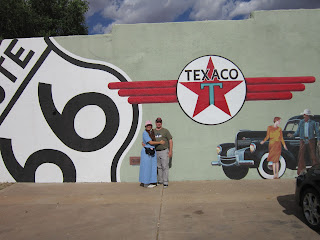 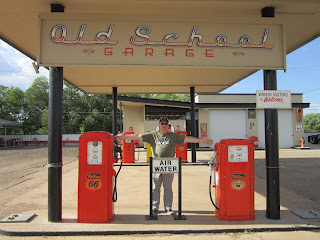 They also have the historic Blue Swallow motel.  Unfortunately, they were full and we could not stay there. 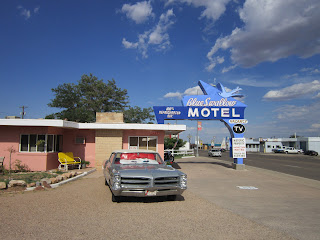 Our last stop was Amarillo, TX where we caught 287 to head on home.  They have a few blocks on 6th street dedicated to Rte 66, but it is just antique shops with a few souvenirs thrown in. 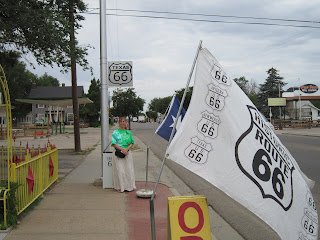 They also have the Cadillac ranch, but it is not history anymore, it is now "tradition" to spray paint it. 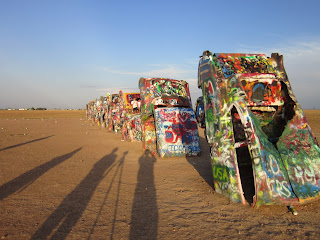 I'll have to share picture from other parts of the trip at another time.  We are going to have to finish up Rte 66 from TX to Chicago sometime - we had a blast, and the t-shirts to prove it!

I hope you are having a great summer too!
Missy
Posted by Missy Shay at 10:46 AM

Great pictures Miss!! That looks like a lot of fun. Glad you guys made it back safe and sound :) Clarissa

Wow Missy! Looks like you had a great time and really saw some great things! Love the earrings and I'm sorry to hear about your computer.

You just posted on my blog and it came up as a no-reply....hmmm..so did Kiera so I wonder if it is a Google + thing. We'll know if I am a no-reply to you!

Find a good computer person and they can frequently get your information off of your crashed hard drive. I don't know how but my son swears it is possible. He also chastises me for not using an external hard drive to back up my information. I'm not too organizes, LOL.

What fun you are having! We did a Route 66 too starting in St Louis and down to Oklahoma. Wow, some of the roads are in such poor shape but so interesting. Glad you have the opportunity.