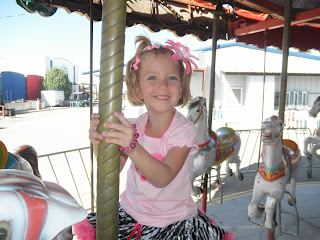 This is my niece Johnna, she turned six in February.  I wanted to make her an easy dress for her birthday and decided to make her a ruffle dress.  I've been waiting to share this tutorial until my sister sent me a picture of her wearing the dress, but I've decided that might not happen!  It is almost April after all! 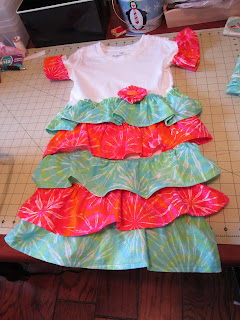 First I bought a cheap t-shirt from Wal-Mart.  I took an old t-shirt and cut a piece of it to make a "slip" to sew the ruffles onto, making it almost the length I wanted her dress to be. The last ruffle will make it a few inches longer.   I just sewed the strip of material onto the bottom of the t-shirt. 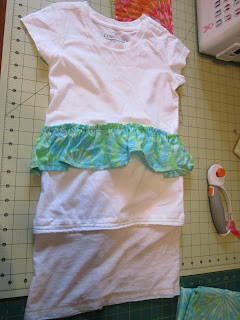 I cut five strips of material six inches wide, twice the length of the width of the t-shirt. 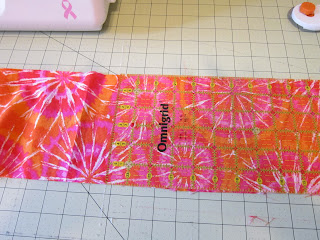 Turn the hems under twice, I use the width of the tip of my finger as a guide.  I turn it twice as I iron it, I believe this is easier than pinning it.  I did a stay stitch on the bottom and ruffled the top.  Of course I could not find my ruffle foot until AFTER I finished the dress.  The hems make the ruffles about five inches wide.  I didn't measure them. 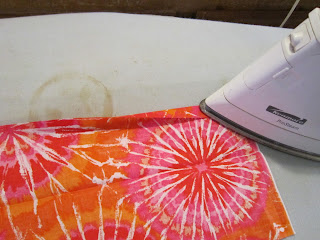 The t-shirt had cap sleeves, so I put smaller ruffles on the sleeves, these were folded in half with the edges folded in to the wrong side just once. 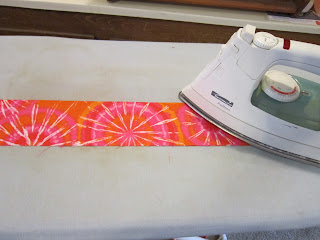 Make sure the open side is on top so you won't have to hem the bottom. 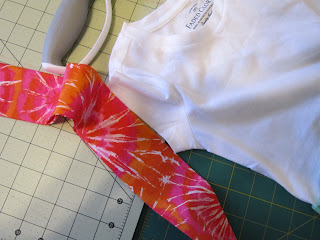 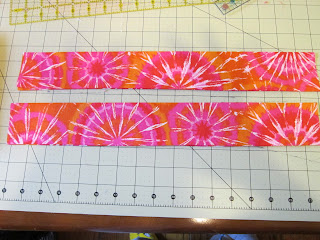 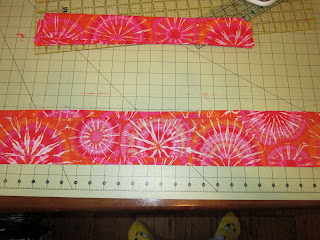 See the hair thingy below?  I use them on my bobbins to keep them from unwinding. 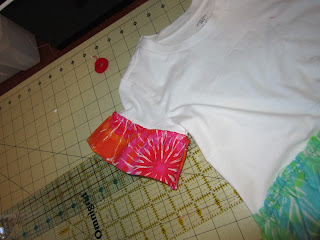 This is the new sewing machine I gave my friend.  I had to test it out! 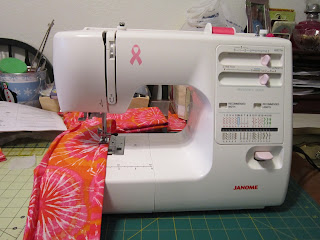 My ruffles are kind of crooked, next time I will draw a straight line around the t-shirt using a ruler as a sewing guide for myself.  Each ruffle needs to be about a half inch under the previous ruffle.  I would mark each ruffle. 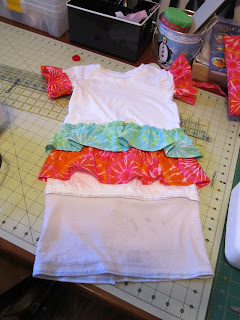 I put a yo-yo on the top to the side of the ruffle.  I had a crooked spot to hide, I was going to put it up on the chest.

I just love these colors!  Wasn't that easy, I want to make some more!  I wonder how this would look for an adult?  I hate getting old!
Don't forget to enter the apron giveaway here:  http://missyscakesandaprons.blogspot.com/2012/03/apron-giveaway.html  I'll announce the winner on Tuesday, the first day of spring!
Missy

Very Cute Missy! Maybe I will transform some of the girls cute t-shirts.

I think this dress is simply adorable and so clever. I'm adding it to my Grandchildren (someday) Pinterest Board. Thanks for sharing it!

Stopping by from An Original Belle link-up! This is so cute and such a GREAT way to transform an old t-shirt too! Plus, my girls are gonna be tall like their momma, so they're gonna need some ruffles! Thanks so much for sharing!!!

A cute and clever dress - adorable too!

What a super sweet dress, love all the ruffles! Thanks for sharing!
Quilting at the River Linky Party Tuesday

I like the way you extended the basic shirt to attach the ruffles.

Such a cute ruffle dress!! Love it!! I'd love for you to share this at my linky party going on now!

This is such a great idea! And it turned out so cute! I would love for you to link it up to my first link party. I know my readers would love it too! http://weliketolearnaswego.blogspot.com/2012/03/what-i-learned-wednesday-1.html

Thanks for visiting Thursday Favorite Things Blog Hop! I'm so excited to be co-hosting this week! What a great dress - nice color combos. And, a nice tutorial as well. Thanks for sharing!

That is 'sew' cute!!! I just love the ruffles, and the fabrics you picked are so fun. Visiting from DIY Thrifty Thursday.
~Kimberlee, The Spunky Diva

This is adorable. Thanks for the tutorial! I have a 5 year old daughter who would *love* a dress like this! Also love your "hair thingy bobbin trick." Great idea!

This is adorable. Thanks for the tutorial! I have a 5 year old daughter who would *love* a dress like this! Also love your "hair thingy bobbin trick." Great idea!

Adorable! I would have had to find my ruffler foot before tackling all those ruffles! (I'm a ruffle-weenie.)

So cute! I've been working on dresses for my 4-year old granddaughter this week and may have to give your tutorial a whirl!! Whoop whoop!!

Missy! So cute! Come on over and share at http://sassafrassalvation.blogspot.com/2012/03/sasss-sunday-salvation-show-17.html

You are "sew" talented, this is adorable. Thank you so much for sharing on the Thursday hop. Sorry it's taken me a little while to get over here. Big Hugs!

Linda @ it all started with paint said...

That is one lucky little girl! I love this dress and the colors and fabric choices are perfect and fun!

Thanks for linking it up!

Oh my! SEW CUTE! Perfect for my Dear Bebe. What a cinch!

Congrats on a job well done.

Wow, that came out so great! I don't consider sewing easy, but this looks like something I might be able to do. Thanks so much for linking up. :)
Karah
(not sure if you know you have word verification on?)

Johnna must be thrilled with the fabulous little dress!

So glad you joined our Cinch party! Linky following.
Kelly

Hi Miss Shay: I'm Connie from http://hotflashncraftn.blogspot.com/, a new LF friend. I would love for you to stop by and be my LF friend, too.
I just love the ruffles. Great idea, thank you for sharing.

You simply cannot go wrong with ruffles! Love it!

What a great way to jazz up a plain t-shirt! Such a bright, fun and girlie dress. Adding the piece of old t-shirting to attach the ruffles is very clever. I would love for you to share this at our ongoing themed linky that's just for Girls' Dresses...
http://threadingmyway.blogspot.com/2012/01/threading-your-way-dresses-for-girls.html

I want one! Looks nice and easy.

Visiting for Pink Sundays- hope you can stop by:)

Missy this is so cute! My little girl (3) wants to wear dresses every day. I will have to add this to my project list for her. Thanks for linking up this week!

Hello! I would like to try this for my little 9 month old baby! I have some cheap long sleeved shirts that I can use but wondered if you had any tips for making it in a much smaller size? Thanks for the great tutorial!

Momma of a little Cutie, you are a no reply so I cannot answer your question. I just take the material and wrap it around the shirt twice for a fuller ruffle and one and a half times for one not as full and that will be enough to make your ruffle. Just guestimate on the length, that's what I do.