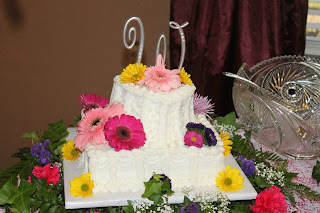 I was busy making a wedding cake on Saturday.  I just decorated the cake, the bride's mother added the real flowers.  My frosting started sagging because of the heat and made the heart lopsided, and I had to add designs to the heart to cover it up.  I also messed up on the frosting.  The recipe I always use calls for 2 lbs of powdered sugar, I use Wilton's recipe, I wasn't sure where my recipe was, so I looked online and got it from the website.  After I decorated it, getting mad at my frosting for not cooperating, fixing it and then delivering it.  I realized what the problem was.  The recipe online was halved, for 1 pound, and I put the whole bag out of habit, which was 2 pounds.  I hope the icing was not too sweet for them!
She turned the pan upside down under the board to give it some height and put greenery around it.  She also covered the board with freezer paper which looks really nice, I've always used aluminum foil but am going to start using the freezer paper.She also suggested putting a tablespoon of flour in the frosting to cut the greasiness taste.  I hope they enjoyed the cake!
Saturday night I made 66 cheesecakes in cupcake pans to sell at church.  I sold 51, gave a few away and had 7 left over for me!  The week before I sold carob cupcakes.  I'm saving up for something special I'll tell you about later.  That is all the big baking I have had planned.  I'll be taking a break from baking for about a month.  It's hot in my house!
I hope you had a great weekend!
Missy
Posted by Missy Shay at 10:12 AM

The cake is lovely and the cheesecakes sound yummy.