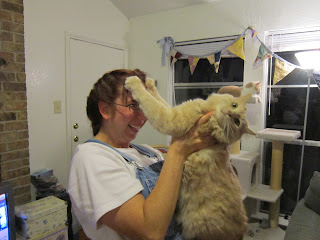 Ever since Tiger was a baby, I have liked to call him "Fuzzy, Wuzzy, Booger Bear", Well he doesn't like it!  LOL  Yes, he did (gently) have his claws in my hair, saying "Seriously?  Again?  Mom you know I don't like that!"
Notice in the picture, Muffin is in the back and you can see his reflection in the window?  I still have not replaced my curtain rod from when the fur babies broke it.  We're planning on moving and I hate to buy a new one if we are moving, ya know what I mean? 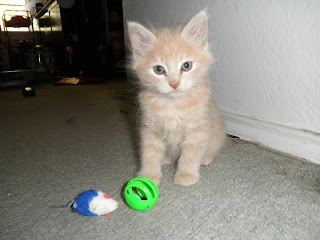 When we first got Tiger, I had named him Butterball because he was such a fat kitten, but as he got older, Chris said he needed a bigger name and named him Tiger. (Please excuse my carpets, I rent) 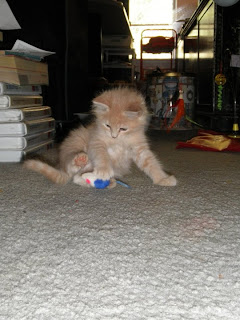 Now we call him Tiger, the cowardly lion because he is scared of everything.  When Chris got a new water bowl for the bathroom, Tiger knocked it over and it scared him so bad he wouldn't go in the bathroom for two months!  It was hilarious! 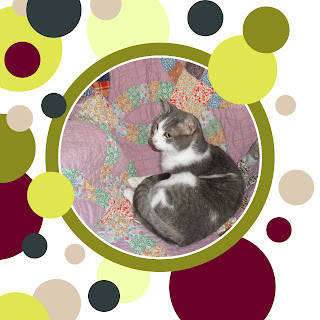 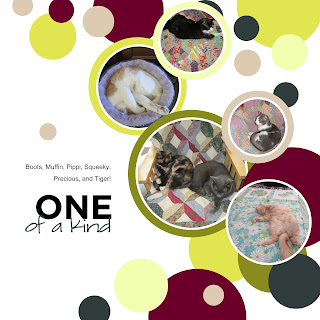 I don't know why I didn't think of this sooner, but I can also use the My Memories scrapbook suite for my photos on my posts!  If you would like to win your own My Memories Digital Scrapbook software, go here!  Monday is the last day to enter!
Posted by Missy Shay at 7:40 AM

Email ThisBlogThis!Share to TwitterShare to FacebookShare to Pinterest
Labels: cats

Tiger is beautiful! What a sweet face, from the get-go. Love the idea of using your MY software to share your photos, too!! :)

Tiger is beautiful! What a sweet face, from the get-go. Love the idea of using your MY software to share your photos, too!! :)

Awww...what a fluff ball Tiger is. He is beautiful!

Oh what a big lug of a kitty - can I borrow him for a big hug? I promise to send him back. Thanks for joining Feline Friday and I'm sorry for the blog problems...