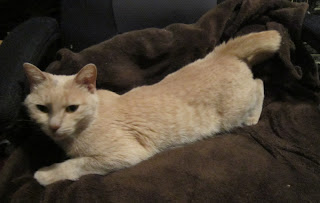 She's the same color as Tiger too, just short haired instead of long haired.  She's in heat!  She's driving my cats crazy and Pippi sits there staring at the door until I open it.  DH says that she is doing the freaky dance, she keeps sticking her rear end up in the air and shaking it around.  Well, this morning when he opened the office door, my innocent Pippi was in her usual spot and watched her dancing for a second and then started dancing too!  She's picking up bad habits from that promiscuous cat!  LOL  I know it's not her fault, but it sure is funny, she's trying to catch a man by dancing and "singing"! 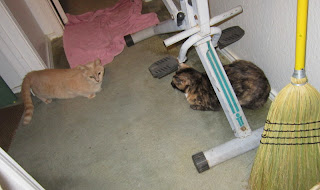 She's driving my boys crazy!  They are fixed but can't figure out what is going on!  They are innocents too, she's corrupting my babies!  She goes home Saturday.  She is very sweet and cuddly though. 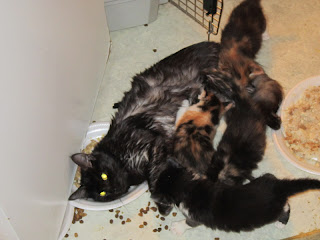 Yes, she is laying in her food feeding the kittens.  She would not let us in the bathroom to pick up the food dishes!  I'm not really sure how my husband was able o get these pictures!  I think she didn't want to hurt the cats by attacking at that moment.
We had to wear an oven mitt to put the plates of food in the bathroom, we would hold the door open just wide enough to put the food in and she would lunge at us, hissing and growling and spewing.  She sounded like a wild animal in there eating!  One time she tore the oven mitt off my hand!  It got stuck between the door half in and out.  Every time I tried to pull it out, she attacked it!  We kept a board across the entrance of the door to protect our feet, it was at an angle and if a kitten happened to be between us and her, she would not attack us because she did not want to hurt her kitten.
Wednesday, she was being good and kind of ignoring me, so I moved the board to the end of the small hallway there so the kittens could come out and play.  I had left it open for about 30 minutes and decided it was time to feed her.  I was stupid enough to not protect my hand or feet and stepped over the board and she attacked me!  First she attacked my ankle, I pulled her off my ankle and she attacked my wrist and arm, I have no idea how I got her off, but ran into the bedroom where my cats were locked up and cried like a baby.  (FYI the oven mitt incident happened the next day)  My hand had gone numb!  She hit something wrong and I was in such pain!  I treated it with a paste of lavender. colloidal silver and bentonite clay to draw out the poisons.  By Friday it was red and slightly puffy on my wrist and ankle, so I started treating it with an oil blend called deliverance, and  by the next day the infection was gone!  It's still sore, but healing.
When I came out of the bedroom she was in her carrier, nursing so I was able to get the bathroom door shut.  I will never go near that cat again though!
The kittens were adorable though, when we got to see them.  Thursday night Chris was able to trick her into another carrier so we were able to clean the bathroom, scoop the litter box and of course play with the kittens! 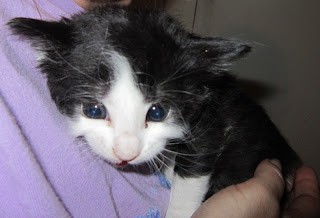 The pictures aren't great because they were just wanting to play. 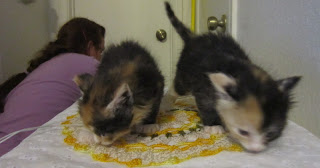 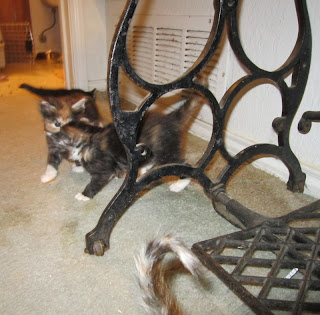 Did I mention that their daddy is one of Pippi's brothers?  Hence the similar coloring. 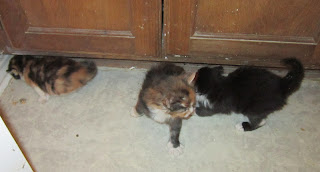 She had three calicoes and one black and white. I wish we could have played with them all week.  Maybe it was a good thing we couldn't or we might have seven cats now!
I almost forgot to mention what happened when her owner picked her up.  She saw Ebbye and it was like she was a totally different cat!  She jumped up on the board to get Ebbye to pick her up!  She loves Ebbye's kids too, so they all get socialization at the house, I just hope her kittens don't get her bad habits!  However the dad has to carry a water bottle around because she attacks his feet!  LOL  She's a regular Dr. Jeckyl and Mrs. Hyde!
Do you write cat posts?  You should link them up at Feline Friday with Sarah Did It!

Have a great weekend!
Missy
Posted by Missy Shay at 11:04 AM

Email ThisBlogThis!Share to TwitterShare to FacebookShare to Pinterest
Labels: cats

There is nothing quite like a kitten! Thanks for sharing the photos.

Darn, it's too bad she is a demon cat since the kittens are adorable and will need some socialization. I hope your wounds continue to heal nicely.

Cute kittens ... :) May they grow up sweet. I would have a tough time kitten sitting and not kitten keeping. Mama Hyde does sound like a demon cat. Hope your wounds are healing well ... Pat