I was visiting my friend Pat this weekend.  I bought two industrial treadles from her, I'll have to take pictures of them to share with you later.  She gave me an UFO.  It is a variation of the Drunkard's Path called the Devil's Puzzle Box.  It is a pattern that I would not have started any time soon.  She had five completed blocks done. 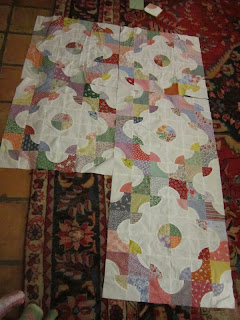 She used 30's reproduction fabric.  She had started the quilt before her mother became ill back around 2008, but then just lost interest in it, so she passed it on to me.  And of course I was more than happy to take her ufo, especially since she had done all of the hard work with the curved seams.  She had enough of the 4 inch blocks completed for me to make one more block. 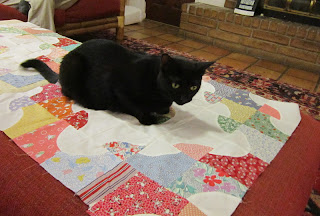 Her Kitty Rosie helped make sure I sewed the blocks together right.  Of course I had my hand crank with me so I sewed that block up while we all sat there and visited. 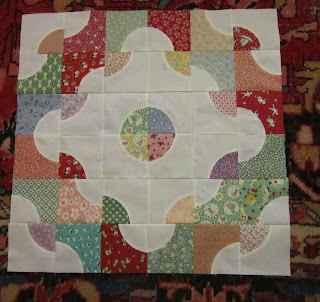 Here are all six of them together. 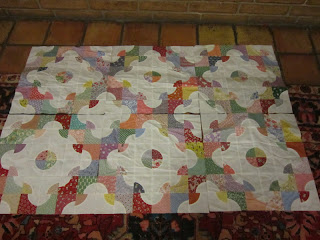 It will be a nice throw size.  There are enough of the small blocks for me to put three in each corner of the border and use four to make the label in the back.  I'll put a four inch border around it.  She also made some yo-yo's to use as flowers, to applique on a second outside border which will be white muslin.  I'm anxious to finish it, but I have to be practical and pack it up and finish it after I move.  I have too many things going on right now to start another project.
I have a ton of her quilts to show you, she is a very talented lady!

Missy
Posted by Missy Shay at 8:36 AM

This is such a pretty quilt and makes me eager to get back to some curved piecing! Can't wait to see it finished but no pressure :-)

Both '30s repros and Drunkard's Path are on my to-do list, whether in combination or not. This is very pretty, and encouraging.

What a pretty pattern! Curved seams for quilts still scare me! I will look forward to seeing your lovely finished quilt.

What a great gift and a beautiful quilt. I have a little acrylic template that you can cut a drunkard's path it makes 3 inch blocks. Also there is a foot that you can use on machines called the curve master and there is no pinning involved. Mine is fit to my Singer 301.

How nice that you have a new quilt project that will be a combination of both your efforts.

Lucky girl - that's a beautiful top! Can't wait to see how you finish it up. Whoop whoop!!

How pretty! I love the fact that you have a shared project with a friend, and you just got stuck in there and did the curved seams... and on a vintage machine too!

I love curved seams, Missy. This little quilt top is a beauty. Glad you finished it up and looking forward to seeing it quilted up. I am your newest follower through Bloglovin'!