I made two blocks for my birthday cake quilt.  I loved this pattern from Homespun Handmaiden.  She made me this block:  Here is her free pattern for this block. 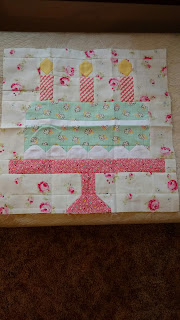 This is the block I made.  Do not use the polyester ric rac from Walmart, it melts!  I decided that I did not want to redo the block though.  I also decorate cakes and felt the wavy ric-rac was more cake like.  If you do add ric-rac to any of these cake patterns, be sure to add them before adding the sides of the block.  I glued the ric-rac on using a glue that does not wash off so I would not have to sew it on.  Only the sides are sewn into the block. 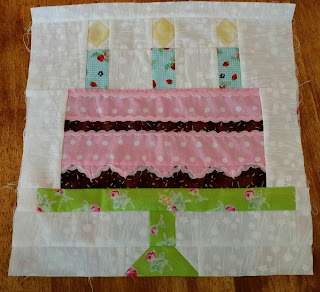 I will have one row of blocks that is 12 by 16 because the pattern by Fat Quarter Shop is just so cute!  One of my Sew Sweet Bee sisters sent me this block:  Which is why I made one of this pattern.  One more block is coming (she is redoing her kitchen, so kind of busy) and I asked her to make this block also, which will give me three for this row, including mine.
The rest of my blocks are 12 by 12 inches. 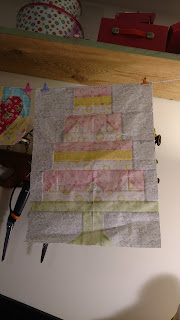 This is the block I made.  I used good quality ric-rac on this block, it was much easier to work with.  You can get the pattern here. 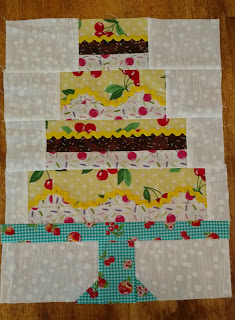 The other pattern used was from Lori Holt at Bee in My Bonnet.  The blocks sent to me from were these blocks:  The chocolate cake was made up by the person who sent it, she combined this pattern and the pattern above, to make it.  You can get the Lori Holt pattern here.  Donna combined that pattern with this pattern to include the bow that I love. 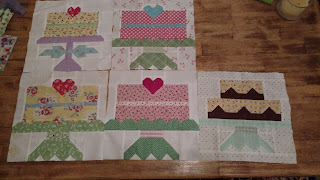 The red cake is a paper pieced pattern on Craftsy, you can find it here. 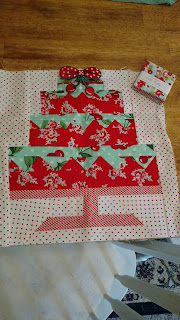 Peggy's triple layer sprinkled cake filled with strawberry layers was her own creation I believe. 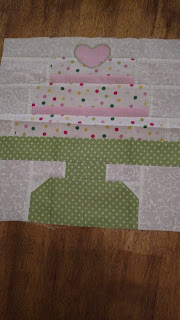 When I made my two blocks I tried to include colors from all of the blocks.  Since one of the cakes had chocolate, I knew I needed to add the chocolate sprinkles material (found in my stash) to my blocks to bring in more brown.  I knew the cherries in my triple layer cake would bring in some more of the red.  I also tried to include the blue and green that some of the other cakes had.  The sashing will be a pink calico.

If you were wanting to make any cake blocks, I hope I gave you a lot of choices!

Sure a lot of cake info. Now I am hungry. My daughter decorates cakes part time, so maybe I could make her some blocks like you have shown here. They look terrific!

What cute cake blocks. I love how different they all look. It will be a fun quilt.

Your cake quilt is going to be one happy quilt. I just love all of the blocks!!!

Sew sweet (no pun intended)! I'd go crazy trying to choose fabrics for each block, but what a great stash buster this could be! XO