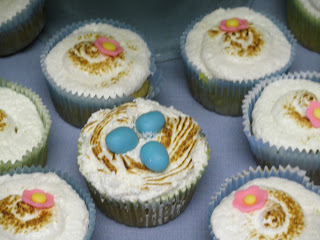 I made lemon meringue cupcakes for the shower, I made some that looked like bird nests and they were very cute, but I asked a young man to carry them in for me at the shower, and he let them fall over.  I actually cried when I saw them and had to walk away because I was so sad.  It was my own fault for not carrying them in myself.  They were my favorite ones too.  I made 12 nests, several with flowers that matched the cake and several mini cupcakes for the children.  The mini cupcakes were to make sure I had enough for everyone.  The cupcakes were a lemon chiffon with a lemon curd filling topped with Swiss meringue, and then my wonderful husband took a mini blow torch to them for me.  He's so sweet!  You can get the original recipe here:  http://www.ciaculinaryintelligence.com/2010/04/lemon-meringue-cupcakes.html
Mine don't look that pretty, I was going for more of a nest look.  The only thing is, my husband kept catching the cupcake wrappers on fire!  :)  If it had been me, I would have probably dropped the "on fire" cupcake and caught my kitchen table on fire.  I think this is why my husband offered to torch them for me!  This is the blow torch my husband bought me.  We used a $5 off coupon at Bed Bath and Beyond, so it was only $15. http://www.bedbathandbeyond.com/search/search.aspx/blow-torch/?sstr=blow+torch&grid=20&dim=1&nty=1&

Lemon Curd ( I doubled the cupcake recipe, but not the curd and I had some leftover)

Preheat the oven to 375°F. Prepare pans with cupcake liners. Sift the flour, baking powder, and half the sugar together into a large mixing bowl or stand mixer and reserve. In another large mixing bowl or stand mixer bowl, combine the egg yolks, oil, water, vanilla, and zest. Mix with a handheld mixer or whip attachment until thoroughly combined, about 1 minute. Add the egg yolk mixture gradually to the dry ingredients, mixing with a handheld mixer or whip attachment on medium speed until a paste forms. (I accidentally did this backwards, and I believe it made the cupcakes dry)When a paste has formed, scrape down the sides of the bowl, and continue adding the remainder of the yolk mixture until it is all incorporated. Beat for an additional 2 minutes on medium speed. In a separate mixing bowl or stand mixer bowl, whip the egg whites with a clean whip attachment on medium speed until soft peaks form. Gradually add the remaining sugar while beating the egg whites and continue to beat until medium peaks form. Gently blend one-third of the beaten egg whites into the egg yolk mixture to lighten it. Gently fold in the remaining egg whites. Divide the batter evenly among the prepared pans. Bake at 375°F until the top of the cupcakes spring back to the touch, about 20 minutes. Let the cupcakes cool in the pans for a few minutes before turning out onto a wire rack to finish cooling before decorating.

Prepare Lemon Curd. (I would suggest making this the night before, and I did not cook it long enough so it was not as thick as it should have been, and make to strain it, I didn't it and it caused all kinds of problems when I was piping it into the cupcakes)

Combine half of the butter, half of the sugar, the lemon juice, and zest and bring to a boil over medium heat, stirring gently to dissolve the sugar. Meanwhile, blend the egg yolks with the remaining sugar. Temper the mixture by gradually adding about one-third of the lemon juice mixture, stirring constantly with a whip. Return the tempered egg mixture to the saucepan. Continue cooking, stirring constantly, until the whisk leaves a trail in the curd. Remove from the heat. Stir in the remaining butter. Strain the curd into a shallow container or bowl. Cover with plastic wrap placed directly on the surface of the curd. Cool over an ice bath. Store the curd, covered, in the refrigerator for up to 3 days.

Put the egg whites and sugar in the clean, grease-free bowl of a stand mixer fitted with the whisk attachment and stir together until the sugar is blended into the egg whites. Place the bowl over a saucepan of simmering water and stir frequently until the sugar dissolves and the mixture reaches 140°F. Transfer the bowl to the mixer and beat on high speed until the meringue is thick and glossy and has a stiff peak.  (I was lazy and did not do this, wish I had, instead I melted the sugar with some water like I do with my IMBC)

Fill a piping bag fitted with a large plain tip two-thirds full with lemon curd. Insert the tip as far as it will go inside the center of the cupcake and apply gentle pressure. Try not to squeeze too hard or lemon curd will squirt out the top of the cupcake. Stop filling once you see any lemon curd around the base of the tip. Repeat with the remaining cupcakes. Clean the piping bag and tip and fill it two-thirds full with Swiss meringue. Pipe a large pearl of meringue on top of each cupcake. Use the back of a spoon to lift up areas of the meringue, creating spikes. Lightly toast the meringue with a kitchen torch or under the broiler until the tips of the meringue are golden brown. 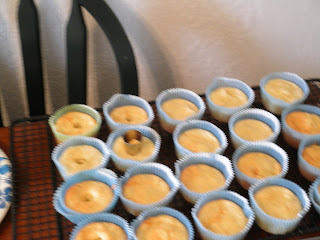 I tried the piping bag method, but my tip would not fit on a coupler and kept poking back up into the the bag.  I had lemon curd all over my hands.  Then I had lemon seeds that I missed because I did not strain the curd,  clog up the tip constantly.  So finally, I took a big tip and cut holes in the top of the cupcakes, and put a bigger tip on my bag to pipe out the lemon curd.  You can see the holes I made in the above picture.

It was worth the time and mess, they were delicious.  I've been putting the leftover lemon curd in my yogurt, it's delicious! 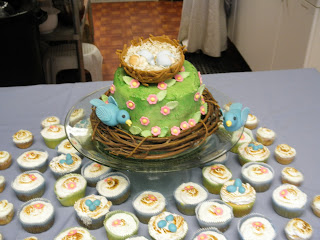 So pretty! You're very talented:)

This looks so yummy! Maybe when things settle down I can give them a try!