Penguins at the Beach Cake 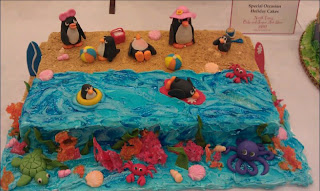 I finally found out how to download the pictures from my phone, and this is a much better picture of my cake.  One of my facebook friends asked me if it tasted as good as it looked, I informed him that I didn't think he would want to eat it since it was made out Styrofoam!  I bought my Styrofoam at Hobby Lobby, it was too expensive to order a real cake dummy.  The cake dummies were cheap but the shipping for them was outrageous!  My cheap Styrofoam worked just as well!  Don't forget your Hobby Lobby coupon though! 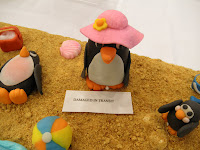 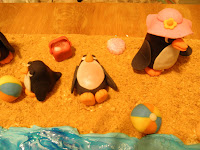 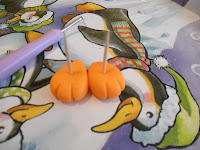 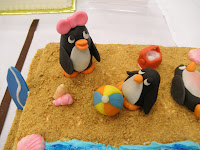 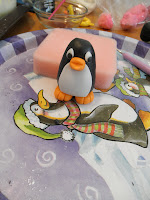 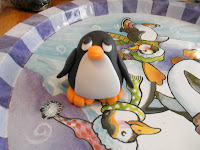 This cute little guy was the first I made, and he turned out very cute!  I made the feet first, and put toothpicks in the feet and added water to make the body stick to the toothpick.  It made the penguins off-centered so I had to add a toothpick to the back underside of the penguin to keep him upright.   Next I made an egg shape but after a while, she shrunk and wrinkled, so I ended up having to make the body out of rice krispies treats on my girls. 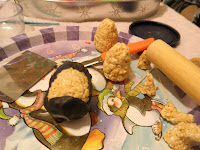 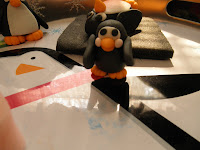 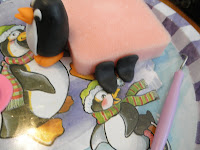 I dried some wings up against the sponge to give them a "flip" .  I wanted the baby's wings sticking out since he was playing in the sand so I put him up against the sides of the tray I was making him on and let the wings "rest" on the lip of the tray until they were dried. 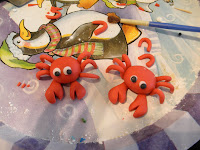 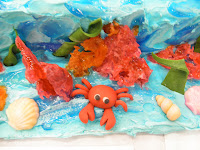 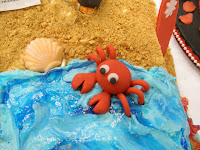 I love my crabs! I made the feet and let them dry in "u" shapes and then picked the ones that were closest in size to put on the

crabs.  After the legs dried I attached them with water. 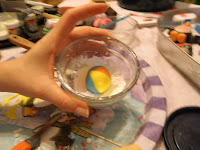 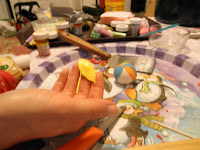 I found a tutorial for making the beach ball here: http://sugarteachers.blogspot.com/2010/06/lifes-beach.html?utm_source=feedburner&utm_medium=feed&utm_campaign=Feed%3A+-sharingAndCaring-CakeDecoratingAndSugarArtTutorials+%28%7ESugar+Teachers%7E+-Cake+Decorating+and+Sugar+Art+Tutorials%29
Except, I free handed the sections of color and did not leave a spot white - I felt that looked unfinished. 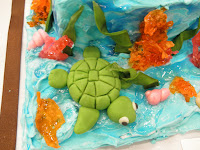 I used one of my flat fondant tools to make the marks in the turtle.  I pretty much free-handed the rest of him. 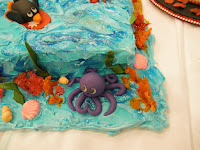 I loved my octopus.  I stuck the end of a paintbrush into the head to make the mouth.  I made the body first, then the legs.  I stuck the legs on underneath. 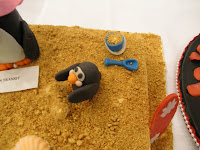 I also made a little bucket and shovel that I filled with royal icing and then "sand".
I ran out of time and did not cover the edge of the board with a ribbon.  Both judges docked me ten points each for that.  I also did not put anything on the back, which I had planned on but had to redo some of my penguins so did not have time to make anymore items.  I will definitely plan better next time! 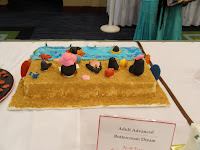 This is a pretty long post, so I'll let you know in the next post how to make the coral, shells, sand and water.


Be sure to click here to learn more about the cake show I entered!
http://missyscakesandaprons.blogspot.com/2011/05/north-tx-cake-show-pictures.html

Adorable!
I will be following you, won't you follow me?
Carla
carla-writes.blogspot.com

I LOVE this cake! I saw this at Sew Can Do and I am a new follower! Chris
http://usandthem1971.blogspot.com/

This cake is just amazing-you've been featured today at Craftastic Monday. Be sure to stop by & grab a Featured On button!

Super cute! I call my boyfriend "Penguin" so I love anything with penguins in it ;)

This is so cute. I made a beach cake one time - sadly no pictures. Thank you for sharing such a great idea.