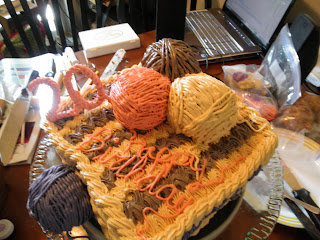 You may be wondering why I took a picture of my cake before I cleaned off my table?  That's easy, I was running late and figured I would take a good picture when I got to my friend's house.  My friend's daughter, Ashleigh turned 20 on Monday.  I normally don't like to bake cakes on Sunday, but I needed to get it baked last night.  I baked my honey whole wheat pound cake ( recipe here:  http://missyscakesandaprons.blogspot.com/2010/05/honey-whole-wheat-pound-cake.html )  With a strawberry filling.  I decorated it first thing on Monday morning since the party was at 1:00 in Ft. Worth. 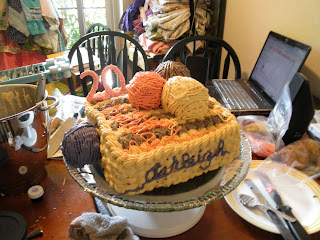 I had the pink yarn spell out Happy Birthday and the purple yarn spell out Ashleigh on the side of the cake.  I was in a bit of a time crunch on this cake and was not able to take very many pictures I'm afraid.  It took me almost an hour to make the basket weave (which I love to make)  I could already tell that it was starting to "shift" from the filling here, but I had put "support straws" in to keep the layers from sliding, it was a three layer cake. 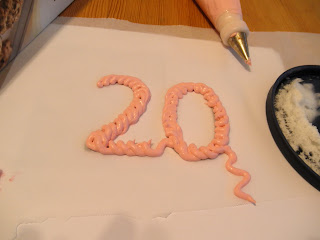 Saturday night I printed out a 20 and placed parchment paper over it to use as my guide to make a 20 out of royal icing.  I "roped" the royal icing to make it look like a crocheted piece of yarn.  Sunday night I turned it over and re-enforced it by looping royal icing of the same color around it.  I laid a lollipop stick on the side of the 0 in the icing then added more icing on top of that and let it dry again over night.  It was the last thing I added to the cake and I stuck it beside the ball of yarn that was the same color and had my yarn sticking down from the 0 connected to the ball of yarn.
I took a tip 21 and tip 22 and drew a continuous line of v across the top, alternating colors trying to make it look like a knitted sweater.  I wanted to do a rope border, but I think my tip ten must have been a garbage disposal casualty because I could not find it anywhere!  (That is why a lot of my decorating tools are dumped on the table, I was looking for it).  So I just used the tip 21 and used it to make a rope border. 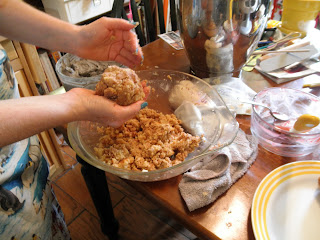 I did not have a square baking pan and Ashleigh really wanted a square cake, so I made 3 - 9x13s, stacked and filled them, then cut the end off to make it fit on the platter.  I took the end pieces that had some filling and a tiny bit of frosting and stuck it in my fridge while I finished decorating the cake.  I have tried making cake balls before and it was a mess!  But I decided to go ahead and try making the balls of yarn out of big cake balls. 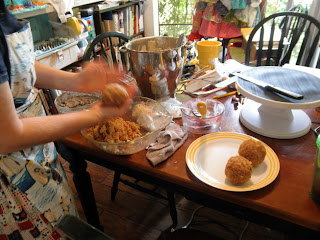 I made them the size of my hand and then added and decorated one ball of yarn at a time to the cake.  There was not enough room to add all the balls so I did add one ball to the side of the cake to write her name in yarn with.  I think they turned out pretty good!  A lot better then a big ball of frosting or fondant!
Here comes the fun part!  I live in TX and yesterday it was like 95 degrees outside.  I think I may have put too much filling in the cake, combined with the heat on the buttercream, and then a bumpy ride on the Highway with a 30 minute drive to Ft. Worth, my cake separated right where I had put my support straw to keep it from moving! 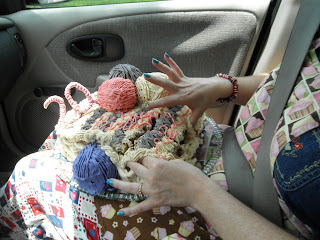 I tried to "hold" it together the best I could on the drive there, but it still looked like there had been an earthquake right down the end!  And of course it was the side that Said Happy birthday Ashleigh!  I was so sad.  :(  I tried to fix it the best I could, but I had not brought all my tips with me, or the off-white buttercream.  There really was not much I could do!  So this is what it looked like afterwards. 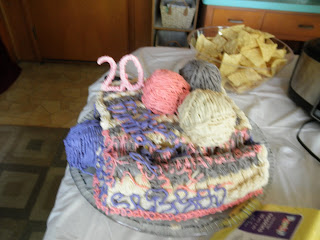 I tried to "stitch" the crater back together using frosting and I tried to cover the mess on the side with "scribbles" of yarn. 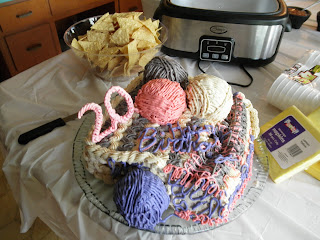 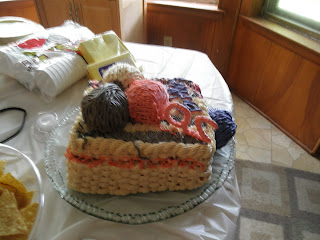 I had to "stitch" all around the cake where it separated! It started melting in her hot kitchen so she stuck it in the freezer.  I hope it tasted ok after being in the freezer.  You can see the slope on the cake, so sad!

I hope you enjoyed my cake disaster story!
Missy
Posted by Missy Shay at 12:57 PM

What a cute cake!!

I've been trying to figure out a cake for my friend who is a knitter and love how you've used giant cake balls as the yarn! Would you be ok with me doing something similar for my cake? I can be reached at samus.erin@gmail.com.

I've been trying to figure out a knitting cake for a friend and love how you created the yarn balls!Would you be ok with me doing something similar? I can be reached at samus.erin@gmail.com.