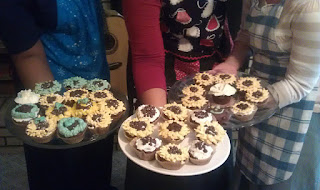 My young ladies had another baking class on Tuesday.  We have added another girl. I think it is very important to teach young ladies how to bake.  Ashleigh and Aaliyah picked a chocolate cupcake recipe from the Martha Stewart's Cupcakes book.  I think it is a ding dong knock off with a marshmallow filling, but the girls do not like marshmallow so we used stabilized whipped cream instead.
When you have a recipe that calls for cocoa but you want to substitute carob powder instead it is 1 part cocoa to 2 1/2 parts carob powder according to the information I found online.  I thought that would make too much carob powder, so for 3/4 cup cocoa we substituted 1 1/2 cups carob powder. 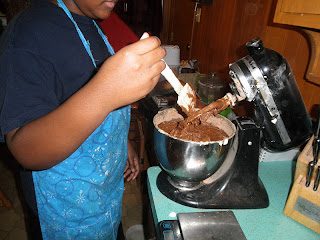 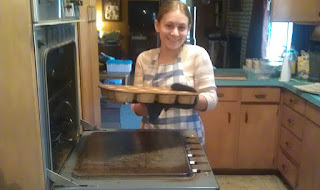 1. Preheat oven to 350°F.  Whisk together flour, carob powder, baking soda, baking powder and salt.  (this aerates the flour, if you are using wheat flour be sure to sift instead.)
2.  With an electric mixer on medium-high speed, cream butter and sugar until fluffy.  Add eggs, one at a time, beating until each is incorporated, scraping down sides of bowl as needed. 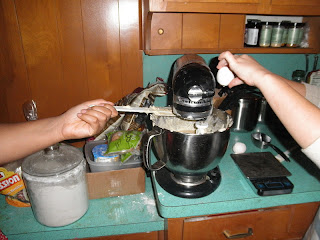 With mixer on low, add flour mixture in two batches, alternating with the sour cream, and mixing until just incorporated after each.  Be sure to not over-mix!
3.  Divide the batter evenly among prepared cups, filling each 3/4 way full. 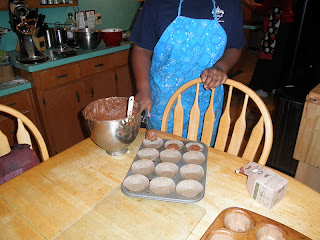 Bake until a toothpick inserted in centers comes out clean, about 20 minutes for regular cupcakes.  Jumbo cupcakes 25 minutes.  Transfer tins to wire racks to cool 5 minutes.  Turn out to cool.
﻿4.  Transfer filling to large heavy-duty resealable plastic bag, and twist bag to remove excess air before sealing.  Snip off one corner of the bag to make a 1/4 inch opening or use tip #8.
We also made Italian Meringue Buttercream, you can get my recipe here:  http://missyscakesandaprons.blogspot.com/2011/08/italian-meringue-buttercream.html
Ashleigh got to separate the egg whites for the IMBC. 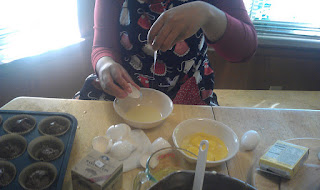 We made sunflowers from the book What's Up Cupcake?, but we used carob chips for the center instead of Oreo cookies. 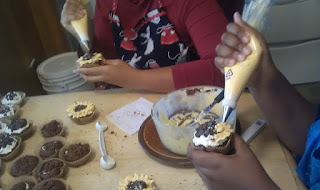 We used a leaf tip for the petals.  For their first time decorating, they did a great job! 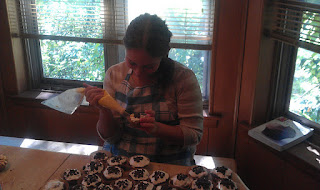 They had a lot of cupcakes to decorate and got bored with the sunflowers after a while so I just let them play for a while. 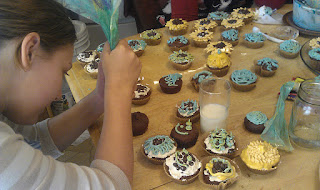 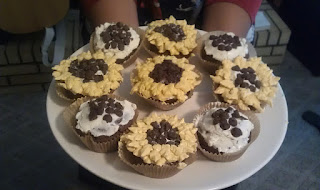 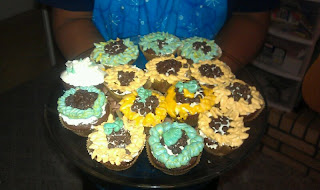 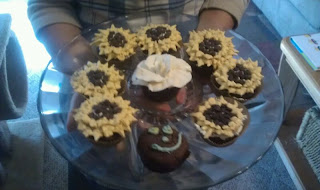 Next week we will be learning how to make carrot cake, thot not buttercream and fondant.
Missy
Posted by Missy Shay at 2:54 PM

Email ThisBlogThis!Share to TwitterShare to FacebookShare to Pinterest
Labels: Recipe

So cool, the cupcakes were yummy!! Thank you so much for teaching this class.

I have only had Carob once... but I was thinking of writing a post about the difference between chocolate and carob. What was your reason for using carob? Do yo do it often? Thanks, coming to you from the blog hop! :)

I used to love carob coated raisins! thank you for sharing at the Thursday Favorite Things Blog Hop Linky Party. I hope you have a wonderful weekend xo P.S. I'm having a party at Katherines Corner today and just a reminder that the giveaway is ending