I have finished another one of my UFO'S (unfinished objects).  I have a list here:  http://missyscakesandaprons.blogspot.com/2011/12/ufo-2012-list.html .I have joined the challenge from Patchwork Times, here is the link http://www.patchworktimes.com/2011/12/20/2012-ufo-challenge-participants-list-of-projects/  .  I finished number 6. (I'm totally off from the numbers she picks) I might have cheated a little, because I did not make it for me, instead I made it for a girl at church.  I had printed the tutorial off and put it in a notebook and she saw the dress and wanted it.  I made it for her last week and here is the outcome 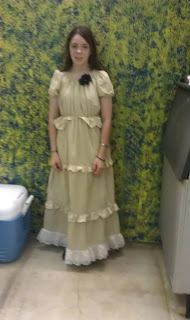 I forgot my camera and had to take the picture with my phone, sorry about the quality.  She wanted to wear for her special at camp meeting, her dad (my pastor) wrote the song "Righteous Rebels".
Here is a better video of their song.  Their mom is singing an original song written by herself.  Then their dad is preaching on "Raising Righteous Rebels"  Be sure to check it out, I'm sure you'll enjoy it.
http://www.ustream.tv/recorded/22141815  My Pastor also wrote the song the girls sang.
The top two ruffles are the material cut out from the scoop on the sleeves.  I just hemmed the curvy part, loosely gathered it and then sewed it on with the top tier.  I had the lace and really liked the feminine look it adds to the plain tan muslin  I used.  I made the two middle ruffles using my ruffle foot.  I used three yards of material and have just enough material left to make the fabric flowers.  I did not have time to finish them since she wanted it for Camp Meeting.  You can find the tutorial here:  http://tearosehome.blogspot.com/2011/04/jcrew-inspired-dress-tutorial.html  I kept the measurements pretty much the same, the bottom two tiers I kept as one piece of fabric instead of cutting into two pieces, saved time that way.
I used the pattern for the top of my Lila Tueller dress
( http://missyscakesandaprons.blogspot.com/2012/04/wanna-see-my-new-dress.html )
I used the size two.  I love the way the dress turned out!  Her mom wants one too now!  LOL
Be sure to check out the tute and let me know if you make one!
Missy
BTW Tabitha was nice enough to share her flu with me at camp meeting so I've been sick since I've been home, but at least I didn't get it until Thursday and did not miss any of the meetings.  I had a great time!
Check out some great music and messages from the camp meeting here http://www.ustream.tv/channel/heritage-baptist-church-live
Posted by Missy Shay at 10:45 PM

You did such a nice job! Thank you for sharing. :)

How sweet of you to make that dress for your friend. I love the little extra touches you added, like the lace and the extra ruffles at the waist. Congratulations on a great finish and thank you for linking up!

Wow, that looks so much like my 'Gunny Sack' brand dress i wore to prom in 1978. Really brings back memories... what goes around, comes around. Little Bit from www.DecorateWithaLittleBit.com

What a sweet dress! Brings back memories to me too!

Yay for a finished project!!! The dress turn out wonderful!

Thanks for sharing at The DIY Dreamer.. From Dream To Reality!