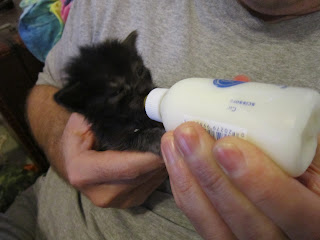 I have posts I need to write up, but I've been a little busy kitten-sitting an orphan this week.  My friend asked me to watch her little baby.  She has such a sad story. 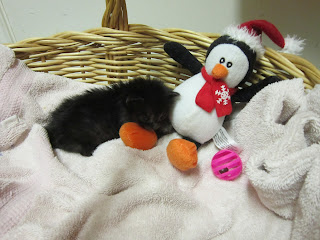 Her mom, who was feral, was being fed by an elderly gentleman.  (parts of the facts might be a little off)  She was pregnant, and a friend of the gentleman saw her being chased by a fox and scared the fox off.  The gentleman went to the hospital for surgery and his friend came by the house (I'm guessing to feed the animals or something)a couple of days later and the momma was no longer pregnant.  I'm not sure if this was when he found her dead or not.  But he found her and the fox had gotten her.  He found two kittens he took home.      Ebbye came by a couple of days later and found another one, Midnight (we are talking days without food), she found two more the next day in the insulation of his house.  They had been without food for about 6-8 days,  Midnight is the only who has survived.  The only thing done differently, was she gave Midnight organic yogurt when she brought her home.  Noone else got the yogurt. 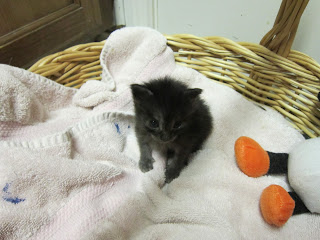 She is about two weeks of age and her name is Midnight.   We are feeding her goat's milk and yogurt. (Goat's milk is very similar to cat's milk and has all the nutrients she needs) She slept all day Monday, in between feedings.  Today, she is staying up longer, and sleeping longer, like my other cats.  She is playing and very active.  She has a box she sleeps in, but since I can't always hold her when she is awake, I made her a playpen, so I can carry her wherever I go and she can see me.  She doesn't cry as long as she can see me. 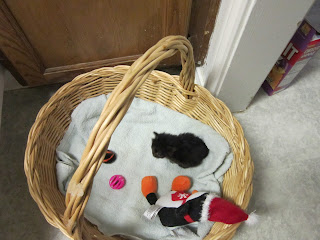 I gave her a little penguin that she likes to play with, and I did notice that one of the other cats stole her pom pom ball while she was sleeping in the box!  I've been setting my alarm for 2am and 6am for her feedings.  This way I can have her bottle ready when she wakes up for her food.  I also have to "make" her go potty.  I never thought I would be excited about poop!  It is still very runny, mustard like and she "screams" when I'm stimulating her to go.  Is this normal? 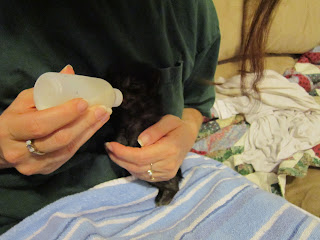 It's been like having a newborn in the house, except this one has four legs!  Here is some great information my friend Holly found for me:  http://www.teamfurr.org/pages/BottleFeedingKittens.shtml#
I'll try to get a short tutorial posted tomorrow, I also need to can bread and butter pickles tomorrow, I hope they turn out!  I seem to have to work around her schedule though.
Missy
Posted by Missy Shay at 9:34 PM

That is so sad! I'm glad you are taking care of the little one.

What a heart warming story...best of luck with the adorable little kitten.

Ah! You *did* post to the Feline Friday!! :) Sweet little story. I'm a cat lover from waaaay back. I didn't realize foxes messed with cats. I knew coyotes did. I'll have to scan, now and see how Midnight is doing!! :)

Poor little Midnight. She is so darling but it is a lot of work to keep regular feedings. It appears she has imprinted on you if she cries when you leave her and the play pen was a brilliant idea! I hope she continues to improve and you'll post on Feline Friday again. Thanks for joining in!