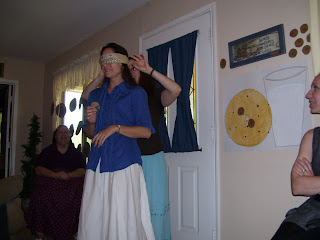 While I was doing research for my baby shower I was trying to come up with some fun ideas for the games that were cookies and milk related.  I could not find any!  Ugggh!  That meant I had to be creative!  I had thrown a shower a year ago that was a pea in a pod theme and we had played pin the pea on the pod (like pin the tail on the donkey) so I decided to play pin the chip on the cookie.  That is my pastor's wife in the above picture, Ebbye.  She loves games! 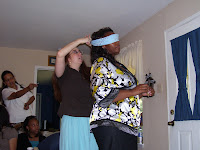 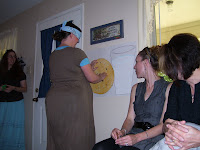 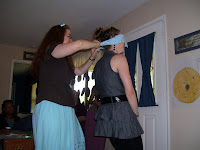 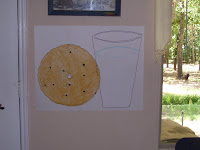 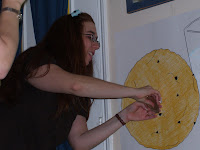 I looked at my invitations and drew the picture onto a piece of poster board and colored it in.  I left a "blank" chocolate chip in the middle of the cookie.  Be sure to keep up with who gets the closest, but if you have someone who is dead center, you need to move it so the other ladies don't cheat by finding that chip and using it as a guide for their chip.  :) 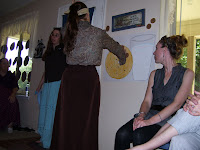 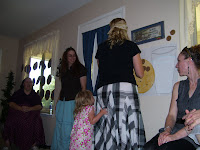 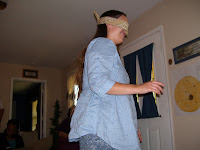 Everyone had a blast, don't forget to have double sided tape, a marker, bandannas, and "chips" we just cut circles out of paper bags to save money.  Isn't it nice to be able to just have fun sometimes? 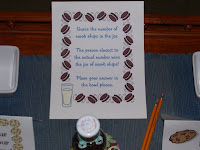 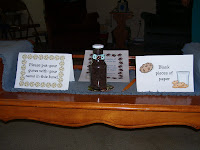 We also played guess the chocolate chips game.  I had Susan count the chips and the winner got to keep the jar of carob chips as their prize.  (Notice I put a matching bow on the bottle?) 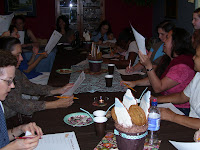 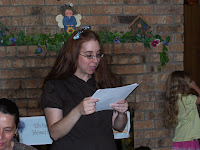 When I plan showers, I always try to plan one game on paper, one group game (pin the chip on the cookie), and one ice breaker (guess the chips), and then I finish up with a fun game like charades or pictionary.  I had a hard time finding something that we could do on paper that matched my theme.  I finally found on Ebay a game called Grandma's Cookie Jar.  I took the same concept and printed up my own game.  On one side I had a description of a cookie.  For ex:  A young girl scout = brownies, This cookie does NOT stick to the roof of your mouth=peanut butter, This cookie is in the shape of a peanut=Nutter Butter.  The answers were on the other side.  It was a lot of fun, unfortunately I threw the leftovers away so I don't have a copy to give ya'll.
The last game we played was charades, I played this game at the end of the shower because not everyone likes these games and sometimes people just don't have time to stay.  I had never played charades before!  I kept finding different rules and stuff on how to play it.  We ended up just doing it as a group and who ever guessed correctly got to go next, however since Ebbye and Cynthia were so good, we started making sure everyone got a turn even if they didn't guess.  The funniest was when Susan did not put her glasses on and misread her clue and nobody could figure it out! 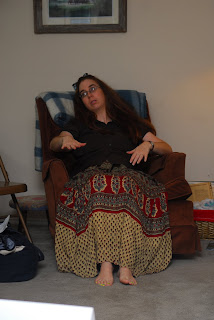 This last one was the clue - baby blanket, but it was hard to get up out of the chair to clean up afterwards!   In case you had missed my earlier post about my skirt, by this time I had torn a big hole in the backside of my skirt and had to borrow a skirt from super skinny Pam, PTL she had one that was too big!  Can you tell that the shoes had come off?  I had taken my shoes off before the shower had even started and I was barefoot the entire time, but with my blue skirt you couldn't see my green and yellow toenails!
I want to thank everyone for being such great sports and playing all of the games I had planned!  I have some miscellaneous details to blog about, about the planning stages of a shower and more recipes to come!  Thank you for joining me today, and be sure to let me know your comments!
Missy
Posted by Missy Shay at 10:56 AM

So creative! I'm throwing a milk and cookies themed baby shower for my daughter next month and will definitely be using some of these ideas. Thank you!