Wow, I got three packages yesterday!  All full of pinwheels!  The packages came from California, North Carolina and South Carolina! 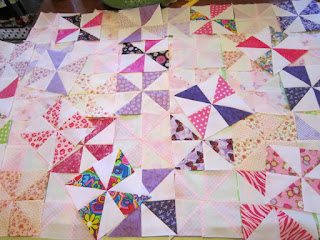 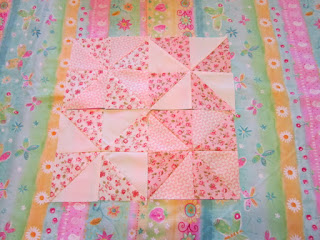 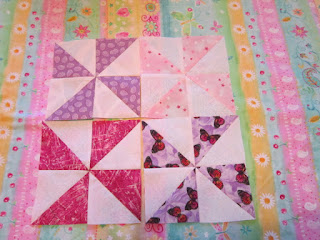 Aren't these pinwheels great?  So much better than mine, but maybe mine will look better once I trim them!
Lisa, at Piecework Treasures has also made up some pinwheels!
I got three more packages, but did not get them photographed yet, I'll share those tomorrow.
I have not gotten very much sewing done, I have half done scrappy trip along blocks I will share with you on Monday, they should be finished by then!  I've been cleaning instead of sewing this week.  Yeah, sometimes I HAVE to do that!  LOL
Pippi has not been feeling well. 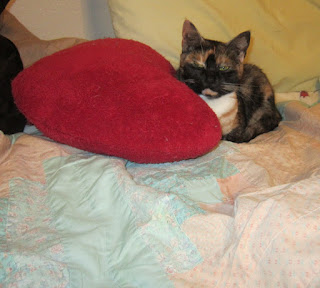 This is her pillow, she has slept with it since she was a kitten, and she slobbers all over it too, yuck! 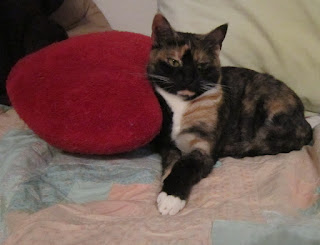 She does not want to leave the bedroom, and she cowers under the quilt.  I think she hurt a nerve on her back and thinks something is biting her. 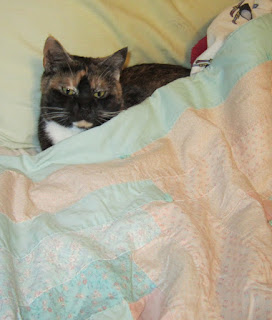 This is her safety zone.  She seems to be feeling better this morning though, She's back to climbing my husband's bass (sigh), at least it has a thick cover on it.  The nice thing is she sure is cuddly when she's not feeling well!  She's usually too busy too cuddle, even though she always very affectionate - even to strangers! 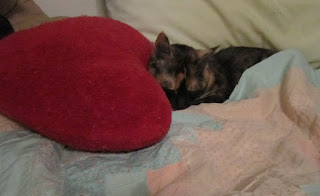 Muffin and I had a little adventure the other day, I wish I had remembered to take some pictures!
My cats are strictly indoor cats, I'm terrified of losing them!
I will let them play in the backyard while I'm out there to watch them.  Muffin got out through a hole in the fence, and behind that fence is like a little overgrown mini-forest, about a block long.  It's impossible to walk back there!  I stood on a chair calling him, trying to get him to come back.  I heard him start wailing!  Of course, that freaked me out!  There is an entrance at the end of the block, on the other street, his wailing was coming from that direction.  I walked over there and looked in the backyard of the first house down there.  He had gone back in the wrong backyard and was terrified and could not get back out!  (he was still wailing by the way).  There was a small pile of wood about a foot high on my side of the fence that I was standing on, I noticed there was a pile of pallets on the other side of the fence.  So I scaled the fence and balanced on this wobbly pile of wood and braced myself against the wood and the fence to get down.  (Did I mention the duplex was vacant?)  I pulled Muffin out of an old aquarium he had taken refuge in to take him home.  He continued to wail until he saw my front door, can you just imagine me walking down the street carrying a cat who was wailing at the top of his lungs?  Crazy cat!  They have lost their back yard privileges after that episode!  LOL 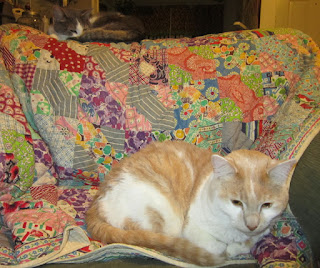 Here is Muffin, Precious is on the back of the chair, his usual spot!
Hope ya'll have a great weekend!
Missy
Posted by Missy Shay at 8:15 AM

oooh...sick and wailing kitties are heart wrenching. I hope Pippi feels better soon!
My calico makes the most heart wrenching wail when she is about to carry one of her toys somewhere. I have yet to figure out what she is telling the toy first...

I'll bet you end up with more than enough pinwheels to make your quilt. What darling background fabric! Hope Pippi gets well soon! ~karen

Sending get well wishes to Pippi! I'm glad Muffin's adventure turned out OK in the end. How exciting (not in a good way.) Have a lovely day!
Neighbors About Town Blog