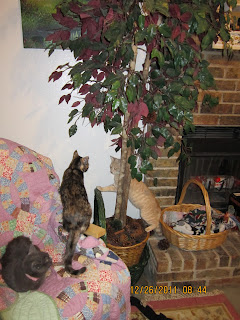 I just wanted to jump in and give ya'll a great laundry tip!  I was babysitting a kitten (the orange cat) about a month older than my Pippi (the calico)who is 8 months old.  When Mac wasn't trying to climb my tree, Mac and Pippi had been playing pretty rough this week and Friday night Pippi got him across his eye.  Scared us half to death because his eye was just full of blood!  He was calmer than my husband and I - LOL.
I grabbed a towel and poured some collodial silver on it and held it over his eye to stop the bleeding while my husband held him.  He meowed so pitifully at me!  Turns out it was just his eyelid she got (did I mention there was something bloody hanging from his eye?)  He's fine now and at home, I have since trimmed all of my cats nails, just in case.
Well, Saturday I found blood spots on a white curtain - right before we were leaving to go to church for our New Year's Eve service.  I grabbed peroxide and poured it on the spot, rinsed it off and poured more peroxide on it and then left.  When I got home I grabbed it to throw in the wash before the stain could set in more, but all of the blood was gone! So the next time you have blood just pour peroxide on it!
Wanna know how to easily trim your cat's paws?  I don't declaw my cats anymore because did you know that they amputate the entire toe and some cats have trouble walking afterward?  My vet told me just to use regular nail clippers, that they work better than the fancy ones for cats.  Hold your cats paws often to get them used to you holding their paws.  When they are asleep (Pippi is so hyper, that is the only time she is still enough), gently get a paw and extend the claw out, only clip the tip, making sure you do not go up too far and get the quick.  They are usually too impatient for me to do the front and back paws at the same time, so it is usually a two day process.
I hope these tips help,
Happy New Year!
Missy
Posted by Missy Shay at 8:45 PM

Email ThisBlogThis!Share to TwitterShare to FacebookShare to Pinterest
Labels: tips

Hi, I knew that about the peroxide. Thanks for the reminder! Sorry about the cat, but glad it is better.

Have a nice day, nice to meet you!

Sounds like I should also get some peroxide when I stock up on antibiotic this week - thanks for joining Feline Friday again!