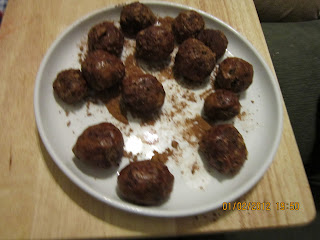 I know this is a terrible picture, but I was being lazy and did not want to dirty another plate after rolling the balls in the carob powder.  Why did I make these you ask?  As I told ya'll yesterday http://missyscakesandaprons.blogspot.com/2012/01/raw-food-fast.html  I am on a raw food fast for ten days.  Well, yesterday all I could think about was the fruitcake in my cabinet and how badly I wanted a piece, so I knew I needed something sweet to eat - but it had to be raw! 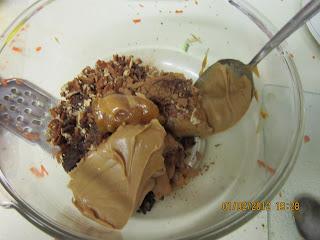 To be honest, I really didn't measure, because like I said, I was having a lazy day and did not want to wash more dishes!  LOL
About 2 cups of nut butter (I used peanut butter)
2 tablespoons of carob powder
2 tablespoons of currants or raisins (I am still out of raisins)
4 tablespoons or more of chopped dates
two handfuls of roughly chopped (big pieces) pecans or any nut
big spoonful of honey (over a tablespoon)
a teaspoon of vanilla (optional)
Mix thoroughly with spoon.
Of course you can pick and choose what ingredients to add according to what you have in your cabinets.  The dates are great for adding sweetness and the nuts are for crunch.  My philosophy is that everything is better with with nuts!  LOL
Roll in a ball and then roll in carob powder.  If I had some cinnamon I would have mixed the carob and cinnamon together to roll the balls in.  I love carob and cinnamon together!  I plopped my balls on the carob before rolling into balls so they would not stick as bad.  These would also be awesome rolled in coconut!
Enjoy because it is a lot healthier to eat these when you get a sugar craving than that piece of fruitcake!  Just make sure you only eat a couple because they are full of calories and fat, so you will have to hide the plate away in the fridge before you eat them all.  At least that is what I had to do!
Hope you enjoy!
Missy
Posted by Missy Shay at 8:12 AM

oh these look so yummy! just my taste! going to make these tomorrow! thanks for sharing and thanks for asking about Basil -- he just got home from his nebulizer treatment and is resting comfortably right now -- he goes back tomorrow and thursday for more treatments and then another x-ray to see how we are doing! thanks for asking -- she send you a big hug!
hugs...me and mine!

I can't wait to try these - I think everything's better with nuts, too! :)